Ashes To Ashes, Rust To Rust??

Monuments of zinc are not the only metal cemetery markers that I have found commemorating those who died in the late 19th and early 20th centuries.  Small rusty iron markers in the shape of a banner with rope trim and tassels on either side, usually with just a name inscribed, perch crookedly on rusty iron legs to mark the burial spot of a loved one.  On the back, they say “Wm. Adams Foundry Co., 960 N.9th St. Phila.”  There is very little information about them, possibly because so few of them exist.  They can be easily removed from the ground, and the handful I have found are completely rust-covered; perhaps earlier ones have rusted away or walked away, with some help.

I found a little bit of information about William Adams, who was born in 1833 in New Jersey.  He was married three times, and by 1870, he lived in Philadelphia with his second wife.  In 1880, he owned a coal yard and lived in North Philadelphia; at that time, North Philadelphia was considered a fashionable address for the “nouveau riche”--those with “new money” earned from manufacturing success.  The 1900 and 1910 census list Adams as being married to his third wife and working as an iron merchant and proprietor of an iron foundry.  Adams had originally partnered with a man named Storrie in the 1880’s-1890’s to start the Adams and Storrie Iron Foundry. (I think…they may have been operating before that.) He later separated from Storrie and incorporated the William Adams Foundry Company in 1903.

Iron foundries helped to build this country.  In 1926 economist J. Russell Smith observed that in the United States economy "a thousand industries must have iron and steel or they cannot go on."  Foundries produced everything from train rails to farm equipment, barbed wire to typewriters, and outdoor furniture to construction beams for buildings.  Adams’ foundry was considered a “general” foundry, meaning he produced a variety of items, including cast iron horse ties (a 25-pound circular disc of iron with a thin iron ring on top that was carried on wagons and carriages and used if no other place to tie the horses was available) to cast iron garden chairs and urns (I found a large Adams urn in an online auction that recently sold for $1500.)

As I stated earlier, there is little information available about Adams’ iron cemetery markers.  They can be found in New Jersey, according to New Jersey Cemeteries and Tombstones: History in the Landscape by Richard F. Veit.  In a Mount Holly, NJ cemetery, Veit found “small bannerlike markers…embossed with the name of the deceased on a small rectangular plaque, beneath which hangs a metal banner reading ‘father’ or ‘mother’ with iron swags in either corner.  Marked with the name of a Philadelphia foundry on the reverse, they seem to have been an inexpensive metal alternative to other more traditional memorials.”

I only have a handful of photographs of these metal markers.  I did some quick internet research on the deceased, and found precious few facts about most of them.  They were not wealthy people, and not much information is available about them.  I am intrigued by these markers because I love ironwork, and because they are scarce and because not much is known about them.  I will keep researching them, hoping to maybe find a newspaper advertisement from William Adams, offering a low-cost option for the “non-nouveau riche” to memorialize their loved ones.  Stay tuned.

Joseph Hance Fitzgerald (1884-1918) knew automobiles.  He was a chauffeur in 1910 in Philadelphia for a stock broker, and in 1917, he was a machinist for Guarantee Auto Company in North Philadelphia.  He was married to Clara Sauerland, and left her to raise their 2-year-old daughter Margaret, when he died in the Philadelphia Flu Epidemic of 1918.  The "Spanish influenza" started in Madrid and spread through Europe and Asia, and reached America in 1918.  Nearly 22 million people died from the disease.

I can find no information on Clarence Hilderbrandt.  But I haven't given up yet.

It is difficult to trace Carrie Stroud through historical records, as I have no date information here, nor do I know if Stroud is her married or maiden name.  The Stroud family, of course, founded Stroudsburg before the Revolutionary War, but I can find no record of a Carrie in the genealogy records.

Milton D. Delp (abt 1862-1927) has a metal marker placed in front of his wife Sarah's stone memorial.  She died 14 years before he did, and perhaps his survivors (if there were any) did not have the money to purchase him a matching stone.  (Someone did paint the marker grey.)  There is a large number of Delp's in the Montgomery County Mennonite community, so presumably, Milton was a Mennonite, or at least his ancestors were.  He lived in Philadelphia in 1920, and was a harness maker.

John W. Ford's metal marker is in front of his Woodmen of the World stone monument, which is in the shape of a pile of logs.  Ford (1887-1919) was born in Montgomery County, Pennsylvania, the son of a building laborer.  In 1917, Ford was a laborer for the Newark Hair Felt Company of Lansdale, PA.  (they made woolen, worsted and felt goods)  On his WWI draft registration card, he is listed as deaf.  In the 1920 census, his widow Clara is a seamstress in a shirt factory (she was raising their 3-year-old son Ervin).  Ford's mother, living nearby, was widowed and did laundry for other families.  I don't know how or why Ford became a member of Woodmen of the World; perhaps he joined for the life insurance benefits, including the stone monument the WOW provided for members until about 1920.

I cannot find any information about Marie and Henry Robold.  But I haven't given up on them yet either.

The above four markers are located together and are family members.  John G. Krider (1821-1890) was born in Germany and lived in Montgomery County, working as a carpenter in 1870.  In an 1890 Philadelphia directory, he was listed as living in Germantown, as a carpenter.  He died that same year.  He was married to Rosanna, and their daughter Mary married Harry Ambers, who worked as a conductor (on the railroad maybe?) and as an insurance agent.  Harry's mother was Mary A. Ambers (1828-1910).  Mary's maiden name was King, and her mother was Catharine King (1802-1895).  I believe that Edwin J. Krider (1850-1875) was a son of John G. and Rosanna Krider, but I am not sure.

So as you can see, none of the "owners" of the Adams Foundry metal markers had a great deal of money.  Perhaps then these markers were the choice of those without the money to purchase stone markers.  I wonder what they cost.  I also wonder what purpose the metal hook hanging from the center of the marker served??? Today, there are still inexpensive markers available for those who choose them, or for those who don't have a choice.  But they don't have the decorative details that Adams put into his little metal banners, with tassels and rope trim. 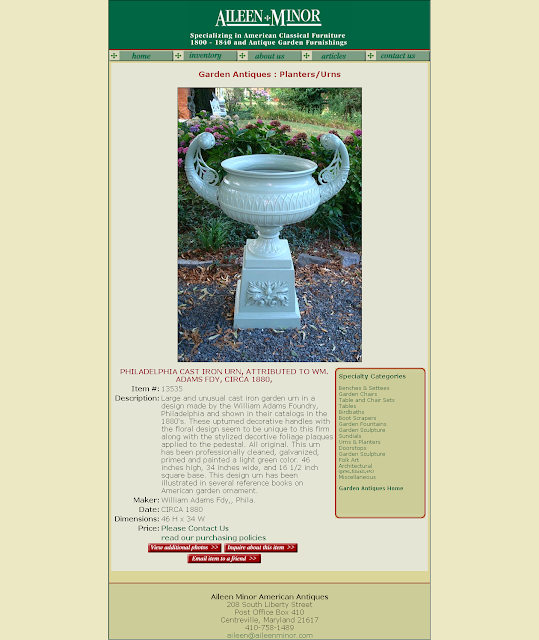 I came to your blog through a search for Adams and Storrie… I just bought a massive garden urn (Philadelphia craigslist) that’s stamped with their names. It’s very similar to the sold item you included, but in very rough condition.

I see this post is from last year, but if you happen to have the source for your info on their partnership, I would be really interested.
Thanks! Victoria

I oddly enough took the same pic if the marker in montgomeryville. I too am fascinated with these markers. Love your info on the people who are buried there. I think the metal hook maybe was for flowers? Or possibly a bell with a string that went into the coffin for the person to pull in case they were buried alive?

FYI, Marie and Henry Robold at St. Mary's Cemetery in Doylestown , Pa. They were survived by there Mother Louisa Robold, My Great Grandmother ( Died a few years after there death and buried at St. Mary's) there father Otto Robold ( My Great Grandfather, who then remarried and buried at Holy Seplecur in Cheltenham ), Sister Marie Robold, who later passed away and buried beside her mother Louisa at St Mary's ), brother Bernard Otto Robold ( My Grandfather who passed away in 1981 at Holy Seplacur in Cheltenham),there brother Joseph Robold ( My Great Uncle who passed away in the 1950's ) Marie and Thomas died as infants from early 20th century diseases.
Richard Robold
Southampton Pa

Currently re-doing a bench, of which the ends are cast iron from the Wm.Adams Foundry Co. Despite multiple coats of paint, they are (the bench ends) still in good shape. Will return and post a pic of it when completed.
Came to this site for some background on the foundry and find it interesting that Adams was from NJ. Came across the ends in a warehouse clean out in Camden, NJ on the water front about 30 years ago.

8 States (but mostly in PA)

Get Your Copy of Engraved: The Meanings Behind 19th-Century Tombstone Symbols---$16.00 + shipping

Engraved: The Meanings Behind 19th-Century Tombstone Symbols is my 48-page full-color soft-cover book about some of the most popular sy...