Recently, I have added some bird feeders to my yard, and have been counting birds for Project FeerderWatch, a program with the Cornell Orinthology Lab.  I have counted on average 40 birds per week and more than 14 species.  Which is practically squat when compared to my parents' feeders on the old dairy farmstead----I think they get visited by 40 birds an hour.  When my mom goes out to feed the birds, I like to call her Tippi Hedren.  But still, I am enjoying my bird watching on my small scale.

And squirrel watching.  I am the unintentional host to nine of them, and they are the talk of the neighborhood, as people see the little grey buggers hanging upside down like Squirrel-du-Soleil, wrapped around the feeders, or chasing each other (and unfortunately, sometimes the birds) away from the feeders.  Oh well, rodents have to eat too.  [We also have a red-tailed hawk and I'd rather she eat squirrel meat than her fellow birds.]

Birds have fascinated humans for centuries, inspiring the latter to eventually conquer the obstacles to levitation and join their feathered colleagues in flight.  Birds were an important part of 19th century tombstone symbolism as well.

The most common bird found on tombstones is that of a dove.  Doves were perceived as innocent, docile and harmless, and as such, they are frequently found on the graves of children or young adults.  Doves also have religious significance, because of their association with the story of Noah's ark:  Noah sent a dove from the ark several times to see if the flood waters had yet receded and he could land his craft and crew.  After failed attempts to find dry land, the dove triumphantly returned with an olive branch in its beak, and this proved that trees were growing again.  Doves also symbolize peace, and that translates into a peaceful eternal sleep for the deceased.

On occasion, a tombstone will show a dove flying directly downward, seemingly into the ground.  No, that is not the sign that the deceased is going to hell, but rather, it is a Christian symbol of the Holy Ghost, part three of the Holy Trinity.  All four of the gospels tell of Jesus' baptism in the Jordan River, "and the Holy Spirit came down on him in a bodily shape, like a dove on him."  So a dove flying downward on a tombstone indicates that the deceased was a Christian.

Other birds besides doves can appear on tombstones.  Usually they are eagles or hawks, and they are almost always on the graves of men who were soldiers, explorers or strong community leaders.  Eagles and hawks were seen as fierce, brave and dignified birds.  The eagle especially is a patriotic symbol for the United States, since it appears on our crest and money, and appears frequently on the graves of military veterans.

And what about those squirrels, hmmm?  Have I ever seen them on tombstones?  Well, if you look at the last few photographs in this blog, you will find my answer to that question.  Hope you enjoy my images!  Email me at tschane2@verizon.net if you have questions or comments.  Happy Holidays!


And now...have I ever seen squirrels depicted on tombstones?  Not often, only twice in fact, and the one is in Portland, PA and the tree stump and squirrels are so covered with mint green lichen, it was hard to get a good photograph.  But then there was St. Paul's Lutheran Blue Church Cemetery in Coopersburg, PA.  And I found the mother lode of squirrels on tree stumps.... 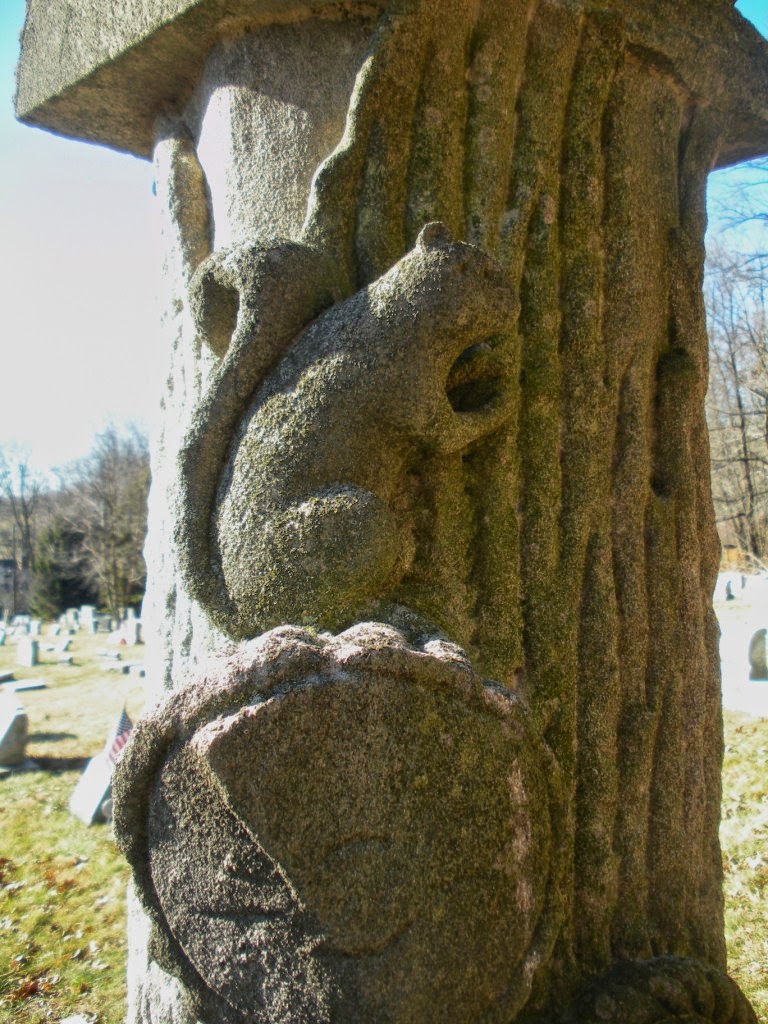 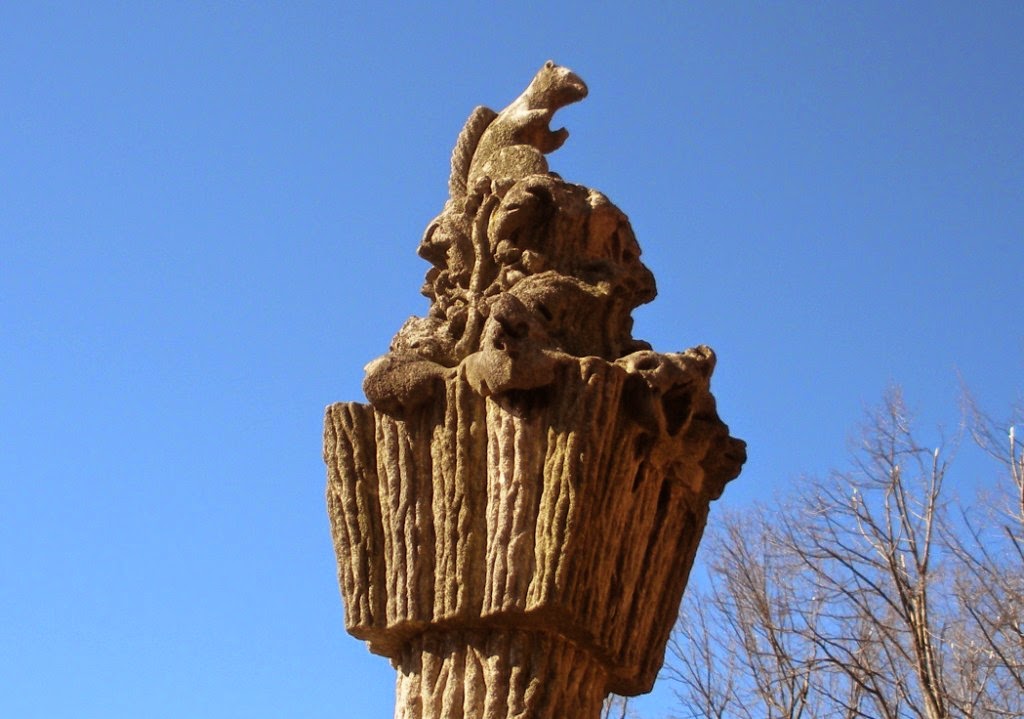 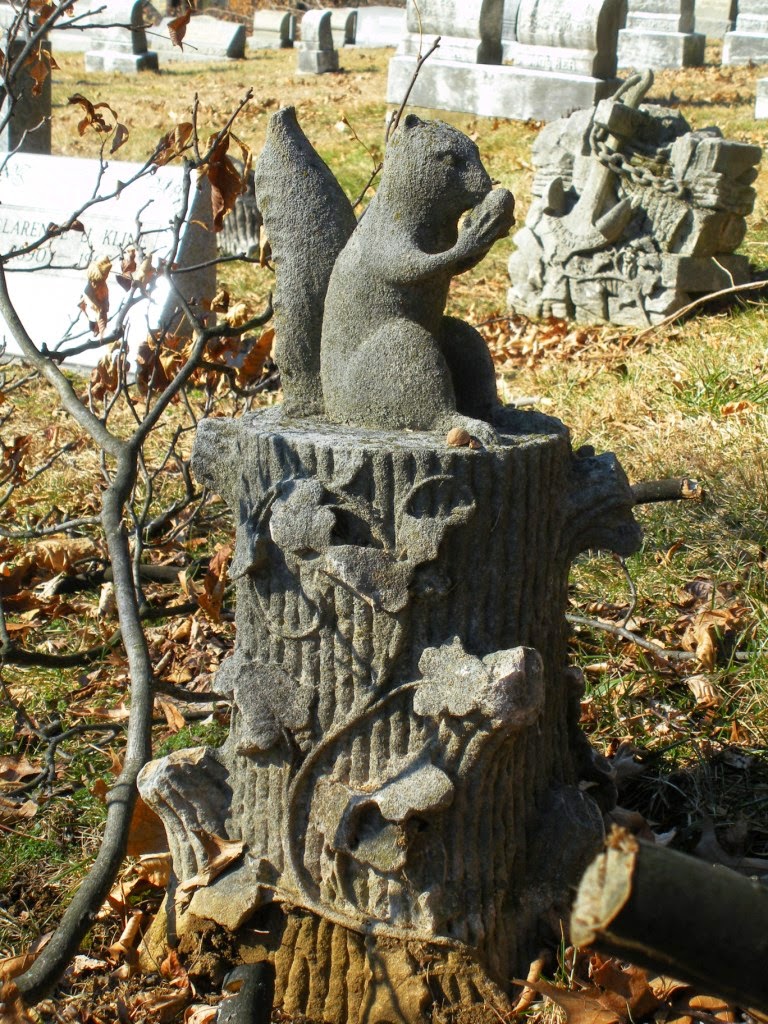 8 States (but mostly in PA)

Get Your Copy of Engraved: The Meanings Behind 19th-Century Tombstone Symbols---$16.00 + shipping

Engraved: The Meanings Behind 19th-Century Tombstone Symbols is my 48-page full-color soft-cover book about some of the most popular sy...